Ball Of Fire: The Life Of Alan Ball 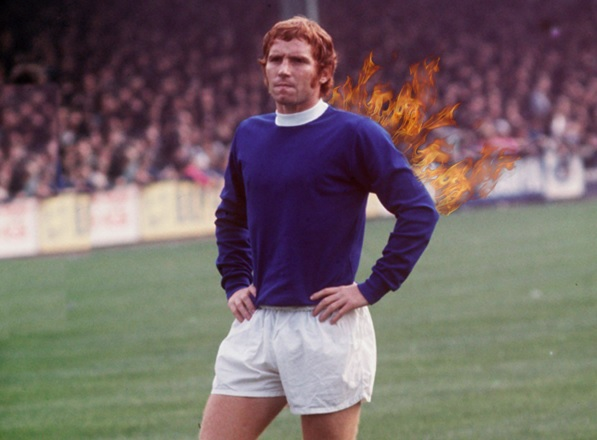 As a life-long Evertonian I was looking forward to seeing Ball of Fire at the Floral Pavilion in New Brighton and it didn’t disappoint me. Not many footy fans can boast an English World Cup winning player as one of their cemented favourites and I couldn’t wait to see how it all began for Alan Ball in Blue Park Theatre Company’s play which has already shone on the stage at several venues across the North West.

Heading up the talented cast was Michael Hawkins who portrayed the young version of the lovable Lancastrian perfectly; from his passionate enthusiasm to his infamous squeaky voice. It’s no surprise Michael will be reprising the role in an up-and-coming TV mini-series about Bobby Moore. John Purcell executed an at-times cantankerous and surly Alan Ball senior well, never quite letting Ball forget he still had a lot to do even as he was handling his son’s World Cup winning medal. There was also a cleverly-cast cameo from Michael Cullen, aka ‘Speedo Mick’ as Eddie Cavanagh; Blues super-fan, notorious pitch invader at the FA Cup Final in ’66, and footy’s first hooligan, decked out in his trademark braces and white shirt.

The production displayed Ball’s family dynamic and showed how he interacted with his parents, sister and sweetheart. Ex-Evertonian Ronnie Goodlass delivered narrative poetry throughout interspersed with footage of some of his finer moments on a large screen. Naturally the show played out in two halves; first up was the story of how he became the great player he is and ended at the point at which he was sold by Everton. Bally reeled off his poignant line ‘Once Everton has touched you nothing will be the same’, to draw the first half to a close. You could almost feel the hairs on the backs of the necks of most of the audience rising, me included. The second half followed his turbulent managerial career. Just like your average footy match there were highs and lows throughout, including incredibly touching scenes of personal tragedy.

Ball was undoubtedly a world-beater on his day. His skill was sublime and his dogged determination and tenacity has rightfully earned him a place up there with the footballing giants. Liverpool has taken him to their hearts, and Ball of Fire is a brilliant tribute to the great, late Alan Ball who would have been celebrating his 71st this year. It’s hard to believe this was packed into two hours but the Blue Park Theatre Company have served up a proper belter of a play. Written by Kenny O’Connell, the poetic narration penned by Bobby Parry and directed by Margaret Connell, Ball of Fire successfully reaches out to footy fans alike and tells the story of an affable man who didn’t give up and lived his dream.