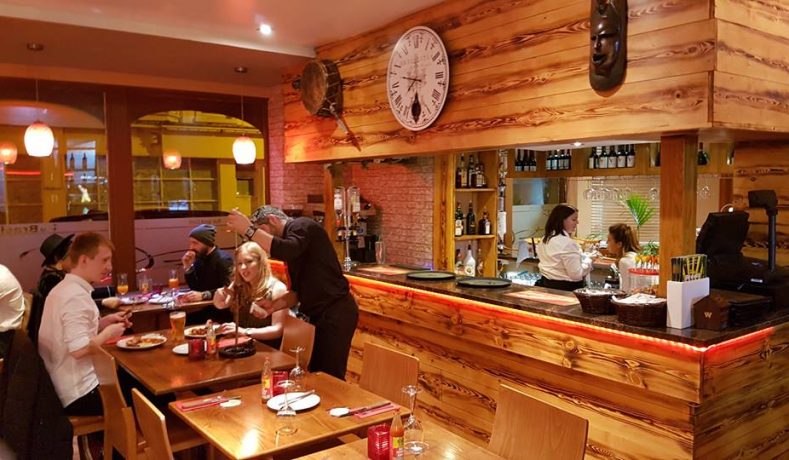 I had never been to a Brazilian restaurant before, nor had I been to the Waterloo/Crosby area, so the prospect of dining at Sabor Do Brasil of South Road, Waterloo, excited me greatly! Under new management, Sabor Do Brasil (previously Rio Brasil), is situated near the waterfront along with a variety of bars and restaurants. Waterloo was an area of sand hills and fields until 18th June 1816 when, to mark the first anniversary of the Battle Of Waterloo, a building called the Royal Waterloo Hotel was built in commemoration of the battle — 200 years later, almost to the day, I was visiting the thriving seaside area. In some ways, Waterloo reminded me of my town of residence, New Brighton, with a real vibrance about the place and as I strolled towards the Waterloo sunset I envisaged what this Brazilian restaurant might be like.
After taking in my new surroundings, I set foot in Sabor Do Brasil and was overwhelmed by a carnival atmosphere! The first thing I encountered was the bar and the beaming smiles of the staff. I was greeted by the beautiful Zowie and shown to a cosy booth in the corner. As I walked through the restaurant to my table, I could see enjoyment in the faces of the many guests as the Samba music and Samba dancers encouraged a lively and fun dining experience. Recently refurbished by the new owner, Frank (who loves the place so much he had his wedding doo there), the interior is open plan with lots of light wood to give it that relaxed vibe. Zowie recommended a Brazilian beer for my first drink, so I opted for Palma Louca — smooth, pale and ideal for slowly sipping and I assessed the fiesta.
As I looked around, there were couples, groups, kids, a birthday party and all sorts of people having a fantastic time. That said, I found it difficult to take my eyes off the two attractive and wonderfully talented Samba dancers! Wendy and Roxy put on a real show, interacting with the guests amazingly, and are part of the Samba Livre Liverpool group who perform at festivals such as the recent Sound City festival in Liverpool. Sexy, flamboyant and as colourful as peacocks, they danced, entranced and enhanced the Sabor experience — Samba Livre Liverpool will be performing at Liverpool’s Brazilica festival on the weekend of 15th July and, after seeing two of their energetic dancers that evening, I highly recommend witnessing one of their shows!
I was having such a good time soaking up the atmosphere that I almost forgot about eating! I decided to go for the all-you-can-eat offer — as cheap as £12.65 if you catch Happy Hour. I was joined by the owner, Frank, who explained how it works. Basically, you receive a plate with a selection of rice, garlic mushrooms, salad, stuffed peppers and all sorts of delights to choose from at the buffet style serving area. Following this offering, various meats are brought to your table throughout the course of the evening — chilli chicken, lamb, beef, steak, chicken and bacon and spicy sausage to name but a few! All meats were tender, juicy and fell of the bone. If you come to Sabor Do Brasil, I suggest fasting before and after — fantastic value for money, especially if you can master your own appetite.
As I strategically stuffed myself, whilst admiring the Samba spectacle on display, I found time to talk more with the owner, Frank. His passion for the place was contagious and judging by the sincerity and enthusiasm of all of the staff, it was clear to me that this is an integral part of what they are doing at Sabor Do Brasil. After such a consumption of food, I was too full to manage desert. I did, however, get the opportunity to try a Caipirinha, a Brazilian cocktail made with cachaça (sugarcane hard liquor), sugar and lime — once again, a fine recommendation from Zowie. I chatted until closing time with the owner, Frank, the Manageress, Zowie, and the rest of the charismatic and welcoming staff. I came to Sabor as a stranger but left as a friend — this place truly puts the fun back into dining and I can’t imagine any better way to visit Waterloo for the first time than experiencing the sun, the sea and, most enjoyably, the Samba of Sabor Do Brasil.Contact Sabor Do Brasil:

Check out a Samba Livre performance: